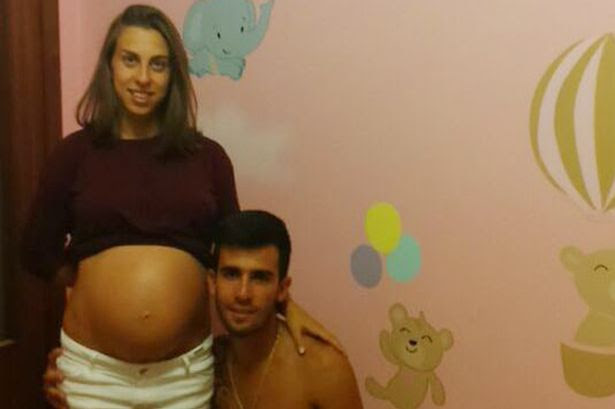 A young mum-to-be due to give birth tomorrow was killed after rally car crashed into watching spectators in Spain.
Ana Cayazzo and her partner Miguel Caridad died instantly when they were struck by one of the race cars as it lost control on a bend.

They have been named as two of the six victims killed in the tragedy.
Poignant pictures - posted by Miguel on his Facebook page before yesterday's tragedy near La Coruña in Galicia, north-west Spain - show him tenderly patting his girlfriend’s belly.

Town hall officials in Cambre, the neighbouring town to Carral where the accident happened, told a local paper Ana was nine months pregnant and due to give birth tomorrow.

Miguel, a keen motor racing fan, is understood to have persuaded her to watch the rally a short drive from their home.
Tragedy struck just before 8pm when a Peugeot driven by Sergio Tabeayo Sande, who comes from Carral, lost control of his Peugeot 206 XS on a bend and smashed into a 20-strong crowd of spectators.

Four women and two men were fatally injured in the horror crash, which took place during the Rally de la Coruna, in Galicia.
Another pregnant woman was reportedly among those who died. The death toll is expected to rise.